A good friend of mine sent this to me the other day, and I just wanted to post it here as well, as it speaks a great deal about the history of fandom, comic books, and just the simple idea that kids, at one point, were able to have fun without "Xstations," "PlayBoxes," "I-Everythings," and whatever manner of de-individualizing nonsense is all the rage these days. And, before I am accused of being an "old fogey;"  I am 28 years old - then again, maybe that is an old fogey, these days. 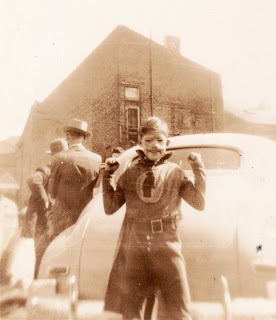 The story papers, often combined in recent writings with other works of the period to form the somewhat problematic and generic term of "Dime Novels," actually have a history all their own, quite separate, but still related to, the history of dime novels. The story papers are also intertwined with the history of the pulp magazines, as the first all-fiction pulp magazine, Frank Munsey's The Argosy, began life as a story paper of juvenile fiction, first published in December of 1882. One of the most prolific pulp publishers, the Street and Smith Company, also has its origins in the story paper era. Depending on how one looks at the situation, whether the dime novel or the story paper came first could be debated; some will say that the story paper, as it reached its heights of popularity in the late nineteenth century, only did so due to the popularity of dime novels. Others will contend that the early story papers, and the newspaper fiction columns that preceded them, helped “popularize literature,” and paved the way for the growth of dime novels following the release of Beadle and Adam's first dime novel, Malaeska, The Indian Wife of the White Hunter (by Ann S. Stephens) in 1860. I have heard both arguments, from those who favor one medium over the other. Whatever the case, the popularity these two mediums enjoyed is unquestionable, and many aspiring publishing-magnates realized this fact. In Munsey's case, The Golden Argosy's title was partly borrowed from another juvenile fiction paper popular at the time, Golden Days, which featured the works of many writers who would later work for Munsey, such as Edward S. Ellis and Horatio Alger, Jr.

Aside from the name of his paper, Munsey was inspired by the monetary success of other story papers selling quite well back in his home state of Maine, such as The People's Literary Companion and Vickery's Fireside Visitor. There was a rise in literacy that began during the mid-nineteenth century, thanks to both the spread of public education, as well as the Post Office Act of 1852; this Act allowed for the publisher to ship reading material for two cents, as opposed to the previous six cents the recipient was responsible for paying upon delivery. This change in postal rates has been called “the greatest boon to mass education ever conceived” – more people were reading, and finding pleasure in doing so, than at any other time in history previously. Beginning with serialized stories printed in newspapers such as The New York Ledger (beginning in 1856), helmed by Richard Bonner (“The Barnum of the publishing industry”), popular fiction eventually began to sell on its own, and became an industry outside of the newspapers.
Two youths who were avid readers of Bonner’s Ledger were Francis Scott Street and Francis Shubael Smith, business manager and editor, respectively, on a small-circulation newspaper, The Sunday Dispatch. The owner of the paper, one Amos Williams (who, by all accounts, held a strong, personal connection to the two) eventually sold The Dispatch, now re-titled The New York Weekly Dispatch, to Street and Smith; on the tenth of October, 1857, Smith’s serial “The Vestmaker’s Apprentice; Or, The Vampryes of Society” appeared in the Weekly, and circulation immediately shot upward for what had been, until that time, a struggling publication. Smith continued writing short stories and serials for the paper, while Street’s business acumen aided in the Weekly’s rise; foreseeing the economic panic that gripped the nation in 1857, he (smartly) began to focus on the selling of  papers at newsstands, as opposed to relying on subscriptions. This move kept The New York Weekly (Dispatch having been dropped within a year of Smith’s first story) not only afloat during the panic, but actually prosperous. One of the early progenitors of the story papers that would flood the market in the succeeding years had been born. Other publications and periodicals followed, with the Street and Smith Company growing to become a powerful force in the American publishing industry throughout most of the twentieth century. It was their example, in addition to those of such “captains of industry” as Andrew Carnegie and J. Pierpont Morgan, that inspired a young Frank Munsey to seek his fortunes outside of the confines of a small, telegraph office in Maine. A little over twelve years after emulating Street and Smith’s success with the story papers, Munsey would (directly or indirectly – it depends on one’s personal opinion of Munsey) kill off the medium, or at the very least, speed its demise, with the introduction of the pulp magazine.

The story papers did not necessarily replace dime novels as popular literature, or vice versa, such as comic books would do to pulps in the following century; rather, one complimented the other, both featuring a secondary route to inexpensive, working-class literature. In many cases, some of the same stories, or variations of which, appeared in both mediums. Detective Nick Carter, collegiate hero Frank Merriwell, and a host of others appeared in both dime novels and story papers. Dime novels eventually died out, only to be followed by the story papers; by the 1920s, story papers still circulated, but these were very few in number, the last remnants that existed before becoming overrun by the pulp magazine, which was able to offer hundreds of pages of sensationalized fiction.
As has been said, works such as The Nugget Library and The Golden Argosy were the precursors to pulp magazines, and later comic books. While having different audiences to a large degree, the place of inexpensive, working-class literature was filled by the dime novels and papers, to be succeeded by the pulps and then comic books. As was the case with the pulp magazines later, the dime novels and story papers of the nineteenth and early twentieth centuries were derided as garbage by overseers of the "hoi polloi," who warned that they corrupted youths' minds. Voices, of which the likes of Frederic Wertham and others would be an echo of decades later, claimed that the fantasy found within those pages created a lawless and lustful generation of young Americans. As would also be the case years later, the authors of such stories were called hacks, and their understanding of literary standards repeatedly called into question. As dime novel historian Edmund Pearson pointed out in 1922, however, such attacks probably had less to do with concerns over morality and more to do with book publisher's threatened sales. In speaking of a recently-donated collection of dime novels to the New York Public Library, Pearson writes:

It is perpetually useful for each generation to see how much unnecessary anguish has  been suffered in the past over things which were really harmless . . .They were never immoral; on the contrary, they reeked of morality. . . Indeed, there is reason to believe that many of the superstitious beliefs about the harmfulness of the dime novel were eagerly fostered and circulated by agents of the "respectable" publishing houses, to whom  any books which sold for ten cents was grossly immoral, for that very reason.

Anyone who actually reads dime novels and story papers will see exactly what Pearson is speaking of; the level of traditional, Puritanical morality evident in the majority of such works is extremely high. Consider, for example, Street and Smith’s understanding of what was fit to print in their papers:

They [other periodicals and story papers of the day] will discover, when it is too late,  perhaps, that the people of the United States will not sustain papers whose editors gather up all the filth from the gutters and dens of infamy to make their columns “spicy.” A paper, to obtain a permanent circulation, must inculcate good morals and pay some regard to decency.

While this does not discount the presence of other attributes understood to be unacceptable today (such as instances of nativism, or misogyny), it does provide significant argument against the notion that the popular literature was poisoning youngsters' minds with delusions of sin, vice, promiscuity, and other similar accusations.
On a slight, opinionated aside, it is interesting to note the progression of popular literature, from the dime novels up through the comic books and then….to what? Comic books still exist, but that is really a niche audience, that does not grow a great deal no matter what marketing gimmicks movie studios try to use in promoting comic book-based films. As far as predominant, inexpensive literature; what has, or could, replace the comic book? In my mind, nothing really, brought on by my opinion that the majority of Americans do not actually read (the pseudo-intellectual hipster sitting around sipping a mocha with a stack of books on his or her table at Barnes and Noble does not count as “reading”); also, the closest contender (today's paperback novels) are not nearly as inexpensive as comics and pulps were, by comparisons that take inflation into account. I can not imagine there will ever be anything that will fill the void left, first by the story papers and dime novels, and later by the pulps, in terms of actual, physical works, but also in the diversity of stories, characters, and ideas that flourished in the pages of those mediums. The creativity of those days is lacking today, and I sincerely have my doubts concerning whether it will, or even can, be reclaimed.

Thank you to the Galactic Central webpage cover gallery for the Golden Argosy image.
Posted by Madison at Sunday, July 10, 2011 1 comment: 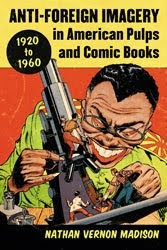 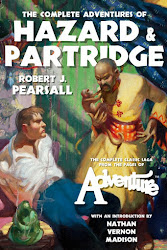 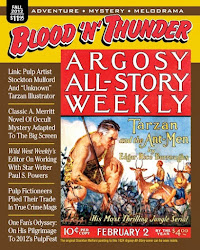 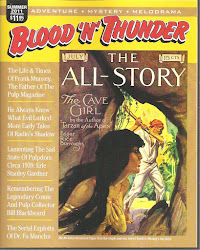